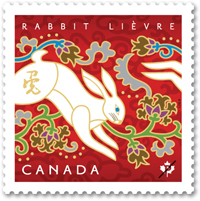 Vancouver, BC – Tomorrow Canada Post will welcome the beginning of the Year of the Rabbit by issuing a set of stamps and related products to mark the Lunar New Year. This is the 15th year Canada Post has issued a Lunar New Year stamp.

The domestic rate commemorative features a rabbit on the heels of another rabbit, creating a repeating image of rabbits that appear to be hopping across the five-by-five pane PERMANENTTM stamps. “This image was a unique way of visually connecting one stamp to the next on the domestic pane,” said Paul Haslip, a partner at HM&E Design, the firm that designed the stamp. “Finding a unique yet simple way of visualizing the rabbit was our starting point in the design. While the rabbit is not as dramatic as the tiger or the snake, it does leap over obstacles.”

The international stamp was inspired by traditional Chinese embroidery. The image of two rabbits chasing each other in an endless circle is based on a traditional Chinese robe medallion. The stamp also uses gold foil to mimic the metallic gold thread in the embroidered design. This element also signifies that this is the Year of the Metal Rabbit, which occurs every 60 years. The Lunar New Year series is one of the most popular ever issued by Canada Post. They are also one of the most challenging to conceive, design and produce, said Alain Leduc, Stamp Design Manager with Canada Post. “There’s the need to come up with a design that’s as multi-dimensional and powerful as the previous one, but also something very different from the past stamps in the series.”

About the Stamps
The Year of the Rabbit PERMANENTTM domestic and international rate stamp measures 32 mm x 32 mm (square) and the souvenir sheet measures 40 mm x 140 mm (vertical). The stamps have 13+ perforations and are general tagged on four sides (domestic) and three sides (international). The stamps were designed by Paul Haslip and Lauren Rand of HM&E Design, illustrated by Tracy Walker of i2i Art, with calligraphy by Tan Chao Chang. The stamps are printed by Lowe-Martin and Gravure Choquet on Tullis Russell paper using lithography in six colours plus gold foil stamping, embossing plus varnish. The Official First Day Cover bears the cancellation of Armstrong, British Columbia. Canada Post is issuing 5.5 million of the PERMANENTTM domestic rate stamp and 240 000 souvenir sheets. The International Rate stamp is available only on the souvenir sheet.

Also, as in past issues in this series, the text on the stamps and related products is in Chinese, English and French.

Stamps and related products are available at participating post offices. They can also be ordered online by following the links at canadapost.ca/collecting or by mail order from the National Philatelic Centre. From Canada and the United States call toll-free: 1-800-565-4362. From all other countries, call: 1-902-863-6550. Additional information about Canadian stamps can be found in the News section of the Canada Post website (canadapost.ca), including photographs.