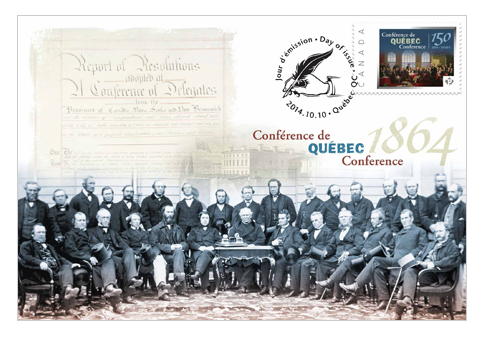 “On October 10, we celebrate the 1864 Québec Conference, reliving a key moment in the creation of Canada,” says Jim Phillips, Director of Stamp Services at Canada Post.

In the fall of 1864, delegates met twice with the ambitious goal of uniting the British North American colonies. The second conference, held in Québec, resolved many of the complex challenges raised during lively discussions in Charlottetown.

From October 10, Québec Conference delegates debated and eventually approved 72 principles that still largely define Canada today. The creation of these Québec Resolutions was guided by a determined Sir John A. Macdonald, who later drafted the British North America Act during the final round of debate in London, England, in 1866-67.

About the commemorative envelope
The Québec Conference commemorative envelope was designed by Isabelle Toussaint, and 8,000 envelopes were printed by Lowe-Martin Group. The envelope measures 170 mm by 115 mm. Images are from the House of Commons Collection, Archives of Ontario and Archives de la Ville de Québec: Frank Leslie’s Illustrated Newspaper. The envelope will be cancelled in Quebec. To purchase philatelic products, please visit canadapost.ca/shop.