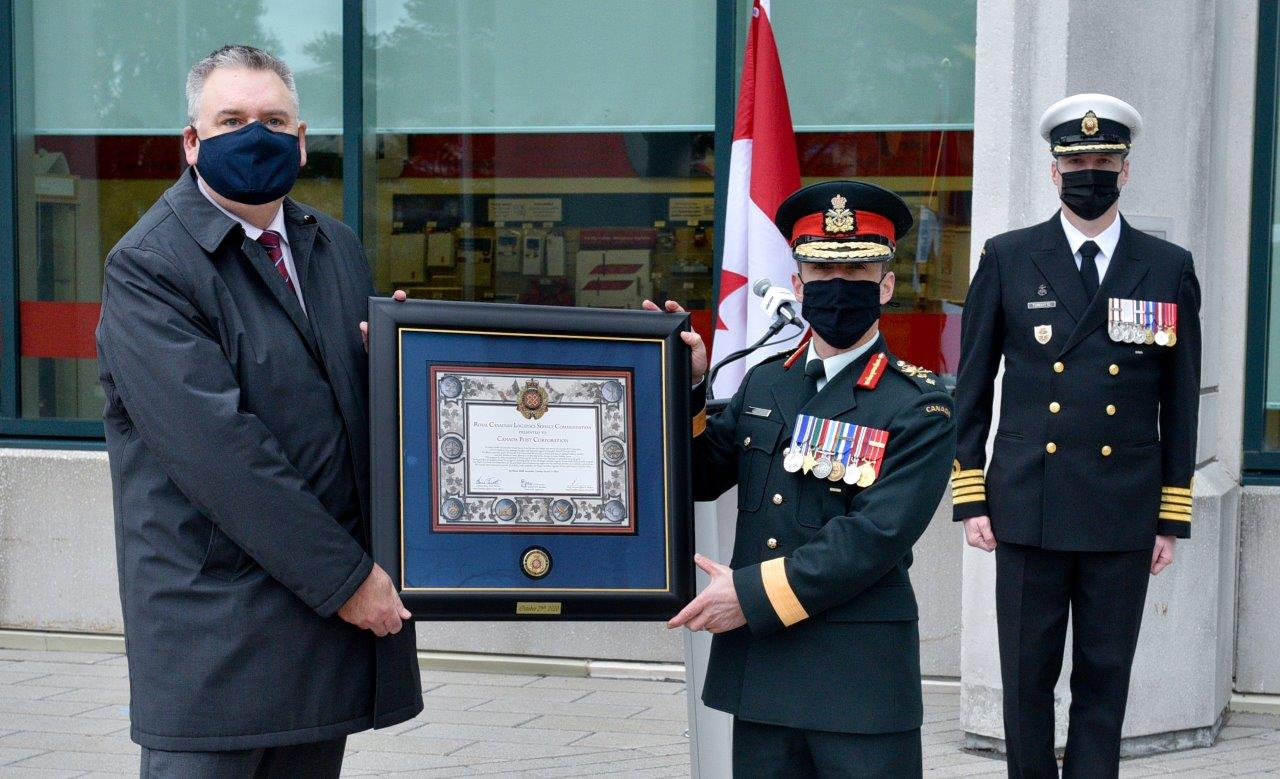 On Thursday, the Royal Canadian Logistics Service of the Canadian Armed Forces, recognized Canada Post’s Mail to the Troops program, in operation for the past 15 years, as well as routine support of Canadian Forces Postal Service, awarding Canada Post a commendation. The presentation took place outside of Canada Post’s head office in Ottawa.

“This unprecedented year has reminded us just what Canada Post is all about: serving Canadians and connecting them to one another – and to the world,” said Canada Post’s President and CEO, Doug Ettinger in accepting the commendation on behalf of the Corporation.

“Our more than 60,000 employees do that through hard work, dedication, and pride. They also bring those ingredients to the holiday mail and parcel program, so that Canadian Armed Forces personnel overseas can receive mail and parcels from family and friends during the holiday season.

“This is Canada Post ‘serving the Canadians who serve’, added Mr. Ettinger, “and it captures the great mutual respect between our military and our postal service.”

“As we commemorate 15 years of the cost-free mail program for deployed personnel, it is important that we acknowledge Canada Post Corporation’s support,” said Major-General Richard Goodyear, Senior Canadian Armed Forces Logistician. “I would like to thank each and every employee of Canada Post, who has worked tirelessly to support the Canadian Forces Postal Service and Canadian Armed Forces personnel.”

Backgrounder on Mail to the Troops program

For the 15th consecutive year, Canada Post is offering free delivery of letters and parcels to deployed troops from their family and friends during this holiday season. We understand how important these messages are to uplift the spirits of members of the Canadian Armed Forces serving overseas. The window for this free delivery of LettermailTM and Regular ParcelTM items runs from October 13, 2020, to January 8, 2021, with Lettermail deliveries extended until December 2021.

Due to capacity limitations on military aircraft carrying supplies to deployed forces, this offer is restricted to family and friends of Canadian Armed Forces members serving overseas. You can find all policies related to sending mail to troops serving overseas on our website: https://www.canadapost.ca/tools/pg/manual/PGcanforce-e.asp#1401892.