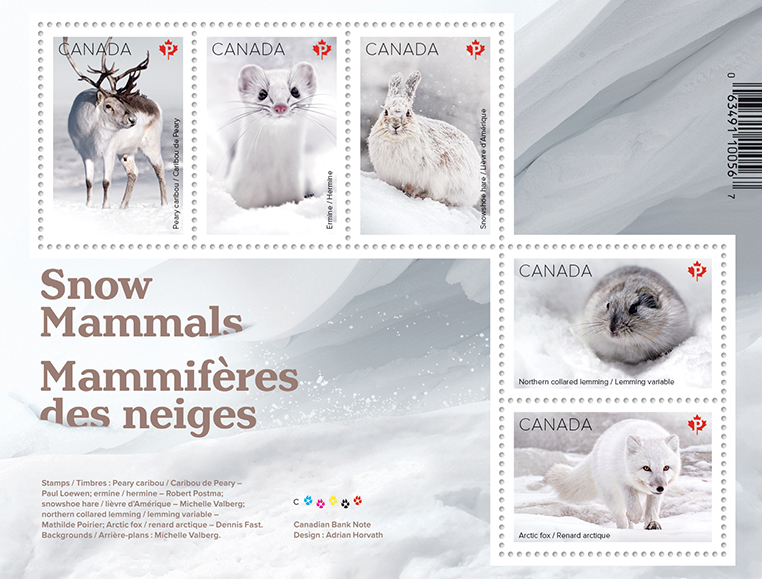 SNOW LAKE, MANITOBA – The beauty and diversity of Canada's wildlife take centre stage in a new set of stamps issued today by Canada Post. Snow Mammals features five animals found in Canada that are uniquely adapted to surviving in our snowy climate because their otherwise dark coats turn white in winter.

These stamps feature the ermine, snowshoe hare, Arctic fox, northern collared lemming and Peary Caribou – two predators and three prey – whose camouflage makes them difficult to spot in their natural habitats, especially at this time of year. The Arctic fox and ermine are stealthy hunters that often rely on the element of surprise to sneak up on their next meal. The snowshoe hare and northern collared lemming (dietary staples of many carnivores) and Peary caribou try to blend into the background to escape detection.

These five are among only 19 species of mammals worldwide – and 12 in Canada – that undergo a change in coat colour as the result of a complex physiological process influenced by changes in daylight hours. Moulting is a gradual, twice-yearly process that starts around the time of the first snowfall and reverses in the warmer months, beginning around the time of the spring melt.

Designed by Adrian Horvath, these stamps showcase an animal in its winter coat and habitat. Each photograph is the work of a Canadian photographer. Robert Postma captured the Ermine; Michelle Valberg the snowshoe hare; Dennis Fast the Arctic fox; Mathilde Poirier the northern collared lemming; and Paul Loewen the Peary caribou.

In the lower left-hand corner of each stamp, visible only under ultraviolet (black) light, is a set of the animal's tracks as they would appear in fresh snow.

Printed by Canadian Bank Note, these Permanent™ domestic rate stamps are available in a booklet of 10, affixed to an Official First Day Cover, and as a souvenir sheet.

Stamps and collectibles are available at canadapost.ca/shop. Follow these links for high-resolution images and additional information in Details magazine.