Canada's 17th prime minister respected for his fairness and civility 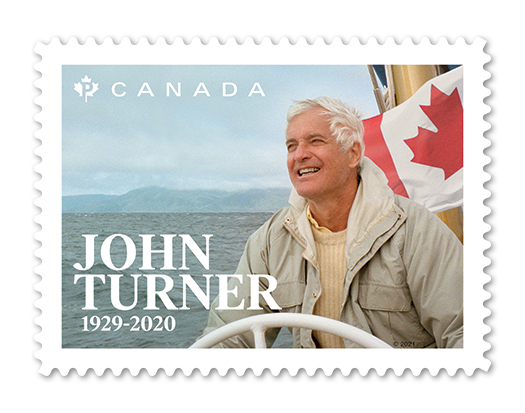 VANCOUVER, B.C. – Canada Post unveiled a new stamp today to celebrate and honour the life of the Right Honourable John Napier Wyndham Turner (1929-2020), whose passion for public service had a lasting impact on Canada.

A Rhodes Scholar at the University of Oxford, Turner earned a law degree before being elected to the House of Commons in 1962. He later became a key figure in the government of Prime Minister Pierre Elliott Trudeau. As Canada’s justice minister, he brought in the Official Languages Act, saw through a series of important Criminal Code reforms, and proposed a national legal aid system. As finance minister, Turner stewarded Ottawa's fiscal policy through the economic tumult of the 1970s.

In 1984, after an eight-year hiatus from politics, Turner staged a triumphant political comeback by winning the leadership of the governing federal Liberal Party. After Brian Mulroney’s Progressive Conservatives won the ensuing election, Turner continued to serve in Parliament as Opposition leader. He led his party through the 1988 campaign defined by the Canada-United States Free Trade Agreement – which Turner called “the fight of my life.” He remained Liberal Party leader until 1990. Politicians on all sides respected Turner for his integrity, fairness and civility.

Later in his career, Turner practised law, served on several boards, advocated for conservation and urged young people to participate in the democratic process. “Democracy doesn’t happen by accident,” he often said. In 1994 Turner became a Companion of the Order of Canada and, in 2012, received the Queen Elizabeth II Diamond Jubilee Medal. Turner died September 19, 2020, at the age of 91.

“This is a tremendous tribute to John, and an honour to our family to see his life’s work recognized in such a meaningful way,” says his widow Geills Turner. “The photo on the stamp is so special. I took it while we were sailing through a beautiful part of our country, in Haida Gwaii in 1985. It represents John and his spirit. It evokes the love he had for nature, for the water, for Canada."

Designed by Paprika Design of Montréal, the stamp is based on a photograph chosen by the Turner family. The 1970 photo on the booklet and Official First Day Cover (OFDC) shows Turner as federal justice minister. The cancel on the OFDC is a reproduction of his signature.