One of five newspaper cartoonists whose work is featured on a stamp, Chapleau is honoured for his unique take on 50 years of news 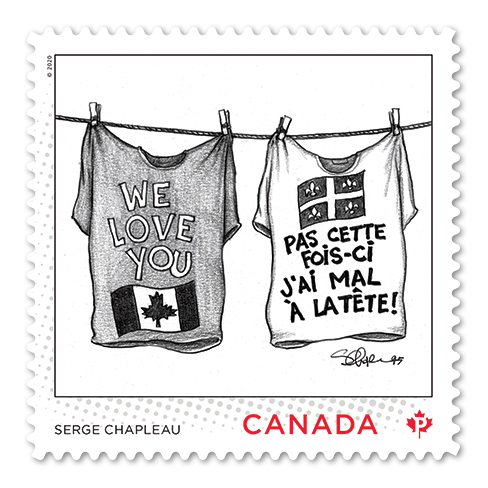 MONTRÉAL – Canada Post unveiled today a stamp honouring Serge Chapleau, the editorial cartoonist at La Presse and a true pioneer of his profession.

Serge Chapleau has drawn inspiration from the biggest European cartoonists and is known for his unique style and high-precision work. From his very first drawing, a portrait of singer Gilles Vigneault published in Perspectives magazine in March 1972, Chapleau became an overnight sensation and quickly established himself as one of the top cartoonists in the Montréal press. After working for various publications, including Le Devoir, L’actualité and 7 jours, he became staff cartoonist for daily newspaper La Presse in 1996, a position he holds to this day.

Through more than 7,000 drawings over the past 50 years, Chapleau has made people laugh and think by conveying the zeitgeist in a single image. In 1982, as a true pioneer of his profession, he became the first cartoonist to bring his characters to life on television. First with rubber puppets, then graphic animations, his famous character Gérard D. Laflaque captivated audiences, and nearly 500 episodes of shows Et Dieu créa… Laflaque and then ICI Laflaque were aired on Radio-Canada.

Winner of a record eight National Newspaper Awards (Editorial Cartooning category), Chapleau has published L’année Chapleau, a yearly collection of his best press drawings, since 1993. When he was named a Member of the Order of Canada in 2015, he was recognized as “one of Canada’s most innovative and respected cartoonists,” and also a pioneer, having created animated cartoons for television.

Canada Post’s other stamps in this set pay tribute to Brian Gable (The Globe and Mail, to be unveiled October 5), Terry Mosher (Montreal Gazette, October 6), Duncan Macpherson (Toronto Star, October 7) and Bruce MacKinnon (The Chronicle Herald, October 8). A live panel discussion with the cartoonists and Ian Macpherson, Duncan’s son, will be held online on October 8 at 11 am, ET. Register for the webcast here.

The Editorial Cartoonists stamps and collectibles will be available at canadapost.ca and postal outlets across Canada on October 8. For images of the stamps, in-depth information on the editorial cartoonists and other products, check out the following: