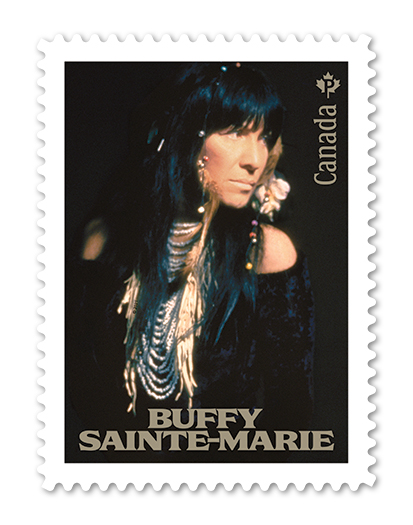 Believed to have been born on the Piapot First Nation in Saskatchewan in 1941, Sainte-Marie is internationally renowned for her unique vibrato vocals and emotionally charged songs, which have been covered by hundreds of artists, from Elvis Presley and Neil Diamond to Barbra Streisand, Cher and Céline Dion.

Raised by adoptive parents in New England, Sainte-Marie taught herself to play piano and guitar when she was young. She launched her career performing at coffee houses and folk festivals in the early 1960s – using her music as a platform for social and political commentary, and a force for change.

An outspoken and lifelong activist, Sainte-Marie continues to raise awareness of Indigenous issues through her work as a musical and visual artist and provides ongoing support for Indigenous youth through her long-standing educational and philanthropic efforts.

She is still an active performing artist at age 80.

The issue includes a booklet of 10 Permanent™ domestic rate stamps, an Official First Day Cover (OFDC), and a limited edition framed stamp enlargement and OFDC. Designed by Paprika and printed by Lowe-Martin, the stamp features a photograph by Simon Fowler that appeared on the cover of Sainte-Marie’s single “The Big Ones Get Away” from her 1992 album Coincidence and Likely Stories. The OFDC – cancelled in Regina, Saskatchewan, near her believed birthplace of the Piapot First Nation – features photos of Sainte-Marie performing in concert.

The Buffy Sainte-Marie stamps and collectibles are available at canadapost.ca and post offices across Canada starting Friday, November 19.

For images and more information on the stamp and other products, please refer to the following links: