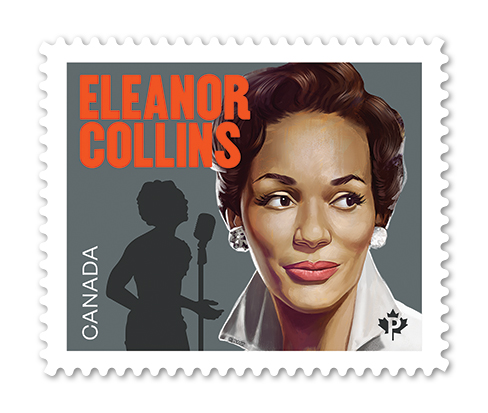 VANCOUVER – Canada Post today unveiled a special stamp to honour acclaimed Canadian jazz singer Eleanor Collins. The Edmonton-born artist began performing in concert venues and on radio in the 1940s and broke new ground in her genre by becoming a star in television’s early days.

Collins grew up singing gospel music with her family before winning a talent contest that launched her career. In the 1940s, she was featured on CBC Radio with the gospel group Swing Low Quartet and, later, with Ray Norris in the jazz series Serenade in Rhythm. In the early 1950s, Collins appeared with other top musicians, such as Chris Gage, Phil Nimmons, Lance Harrison, Doug Parker, Fraser MacPherson, Don Thompson and Dave Robbins. Collins’ moving performances earned her the informal title of Canada’s first lady of jazz.

In 1955, the elegant Collins became Canada’s first female jazz artist to host a national television series, The Eleanor Show. She hosted another series, Eleanor, in 1964. Collins appeared on numerous other television and radio shows through the 1950s, 1960s and 1970s, and made her last concert appearance in Vancouver when she was in her mid-90s. At 102 years old, Collins has received several lifetime achievement awards and in 2014 became a Member of the Order of Canada.

“I am grateful to be alive in this new age, for the quality of life I have somehow been able to maintain, for the lovely acknowledgements of my life and work, and for everyone who has been a part of my journey,” Collins says. “It has all been a real blessing.”

The Eleanor Collins stamp features an illustration by David Belliveau based on photographs by Franz Lindner, from the CBC Still Photo Collection. Printed by Lowe-Martin, the stamp issue includes a booklet of 6 Permanent™ domestic rate stamps and an Official First Day Cover.

The Eleanor Collins stamp and collectibles will be available on canadapost.ca and at post offices starting January 21. For images and more information on these and other products, refer to the following links: