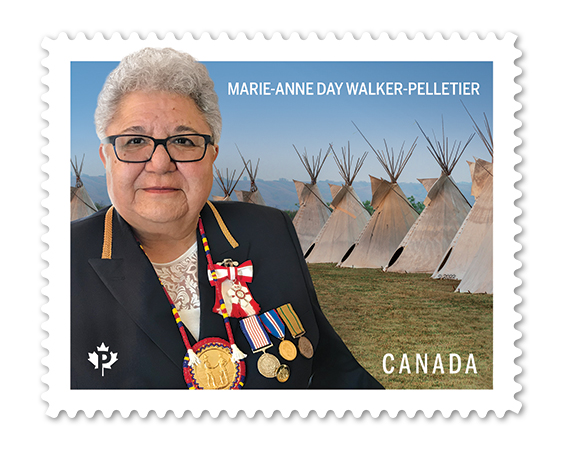 This news release is also available to read in Cree (click here).

FORT QU’APPELLE, SASKATCHEWAN – Today, at an event in Fort Qu’Appelle, Sask., Canada Post unveiled its commemorative stamp recognizing the incredible 39-year leadership of Chief Marie-Anne Day Walker-Pelletier. As leader of the Okanese First Nation in Saskatchewan, she served the most consecutive terms ever by an elected First Nations chief in Canada.

A committed advocate of social reform, Day Walker-Pelletier was part of the Indigenous delegation that met with Pope Francis at the Vatican earlier this year to discuss the Catholic Church’s role in the residential school system.

This is one of three Indigenous Leaders stamps that will officially be released on June 21 – National Indigenous Peoples Day – in recognition of the contributions each Indigenous leader has made to their communities.

During her nearly 40 years as leader of the Okanese First Nation, on Treaty 4 territory near Fort Qu’Appelle, Sask., Day Walker-Pelletier – who was born in 1954 in Regina – forged her reputation as a matriarch and champion of her people. She led numerous projects related to education, wellness and social reform, while also working to preserve the culture, language and traditions of her people.

In 1981, Day Walker-Pelletier ran for and took office as Chief of the Okanese First Nation. Initially, she intended to serve a single term. However, the community repeatedly asked that she retain her position and she ended up serving 15 two-year terms along with three three-year terms. After her last term ended in 2020, she did not seek re-election.

Throughout her leadership, she fought to improve the quality of life of the Okanese and to protect the culture, rights and traditions of all First Nations people through her involvement in numerous tribal, provincial and national initiatives on social reform, health and wellness, and education. She was an advocate of many important issues including violence against women, drug abuse, economic development, housing, health and education.

A survivor of the residential school system, Day Walker-Pelletier was particularly passionate about improving the lives of women and children. In 2021, a year after she retired, her decade-long dream to reintegrate Indigenous foster children into their families culminated in the opening of the Daywalker Home Fire Family Centre.

Day Walker-Pelletier was appointed a Member of the Order of Canada in 2018 and invested in 2019. She also received the Saskatchewan Order of Merit in 2021.

This week, two other stamp unveiling events were held:

Stamps and collectibles will be available at canadapost.ca and postal outlets across Canada beginning June 21.