This year’s heavenly Christmas issue is inspired by the angels who played an essential role as messengers in the Nativity story. Designed by Stéphane Huot and illustrated by Luc Melanson, the simple line drawings in gold and silver on a crisp white background call up a sense of purity and peace. The Permanent™ domestic rate stamp is available in a booklet of 12. An Official First Day Cover is cancelled in Christmas Island, Nova Scotia.

Beloved symbols at Christmas, angels played an integral part in the Nativity story. In the Bible, these celestial beings, whose name derives from the Greek word for messenger, often serve as benevolent intermediaries between God and humanity. According to the Gospel of Luke, it was the archangel Gabriel who told Mary she would give birth to Jesus, “Son of the Most High,” and when the day arrived, it was an angel who announced the good news to shepherds tending their flocks in the region. A choir of angels singing God’s praise appeared around the messenger angel, and then the awed shepherds departed for Bethlehem to worship the newborn king. 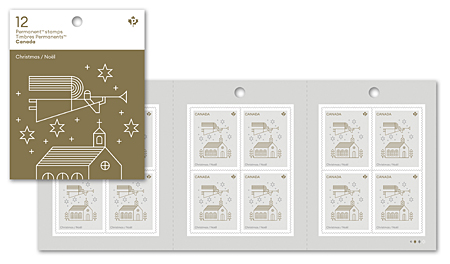