Margaret Atwood is one of the most successful and admired writers Canada has ever produced. Born in Ottawa in 1939, the best-selling novelist, poet, short-story writer, screenwriter, editor and essayist burst on to the literary scene in the early 1960s with two volumes of poetry, Double Persephone and The Circle Game, both of which would win prestigious awards. In 1969, Atwood would establish herself as a serious writer of fiction with her first novel, The Edible Woman, and others would soon follow. To date Atwood has written more than 50 works as novels, short fiction, poetry, criticism, graphic novels and children’s stories. She is the recipient of many literary awards and other distinctions. Her work has sold millions of copies worldwide, been translated into more than 40 languages and adapted into feature films, documentaries and television series. Atwood has garnered a new generation of audiences with the popular and critically acclaimed adaptation of her 1985 dystopian novel, The Handmaid’s Tale, currently streaming on Hulu and CraveTV channels.

The stamp, designed by Steven Slipp and printed by Lowe-Martin, features a photograph by renowned fashion photographer Ruven Afanador, and is overlaid with “A word after a word after a word is power,” lines from “Spelling,” one of her best-known poems on the subject of writing. The front of the Official First Day Cover showcases a sketch by the author entitled Neither fish nor flesh (1975).  The cancel, a bird silhouette inspired by Atwood’s interest in birds and their relationship to our environment, is postmarked in Toronto to acknowledge the author’s deep connections to the city’s publishing community. 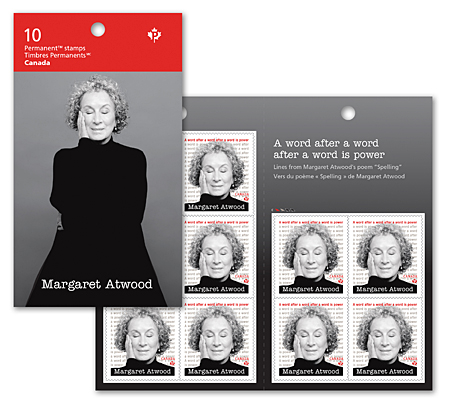 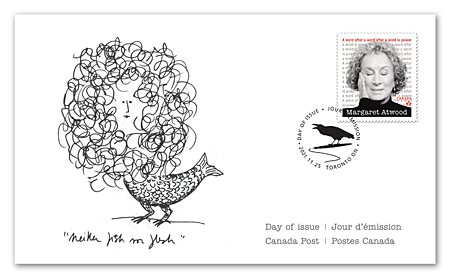