To help create the series, Martin learned about his feathered subjects. He explains that, “You ultimately have to understand the physicality of these creatures.”

Martin’s illustrations focus on the most striking traits of each bird: the cartoon-like colouring of the Atlantic puffin and the dramatic stare of the raven, for example. But these are not static portraits. “I didn’t want the birds to appear passive,” he says of his decision to picture them in their most energetic moments. “Takeoffs and landings were my opportunities.”

For Tsetsekas, these highly detailed illustrations had to be the focus of the stamp design. “We didn’t want to add elements to the stamps that could detract from the birds,” he explains.

Martin relished creating complete illustrations on the larger souvenir sheet and postcards. “I wanted the whole illustration to reveal the rich patterns, colours and textures that come together to create the character and warmth of these birds.”

Forced to pick a favourite, Martin chose the puffin. “When it’s flying, it’s like a missile,” he says, “but when it lands, it always looks like it’s doing it for the first time. I wanted to reflect that quirkiness in my illustration.”

With two more years of Canadian birds waiting in the wings, Tsetsekas is equally keen to see the next issues soar. “Before a single image was finalized, Keith and I worked together to plan each bird in the 15-stamp series,” he smiles. “So, naturally, we’re eager to see them take flight.” 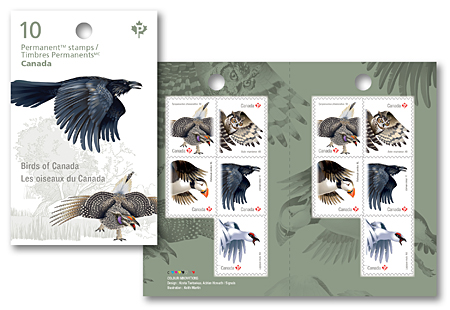