The Canada Post Community Foundation for Children exists to improve the lives of kids. In 2018, it awarded almost $1.2 million to charities, school programs and other initiatives devoted to young people. Here are three of the 2018 grant recipients working hard to encourage literacy and learning in Canadian children. 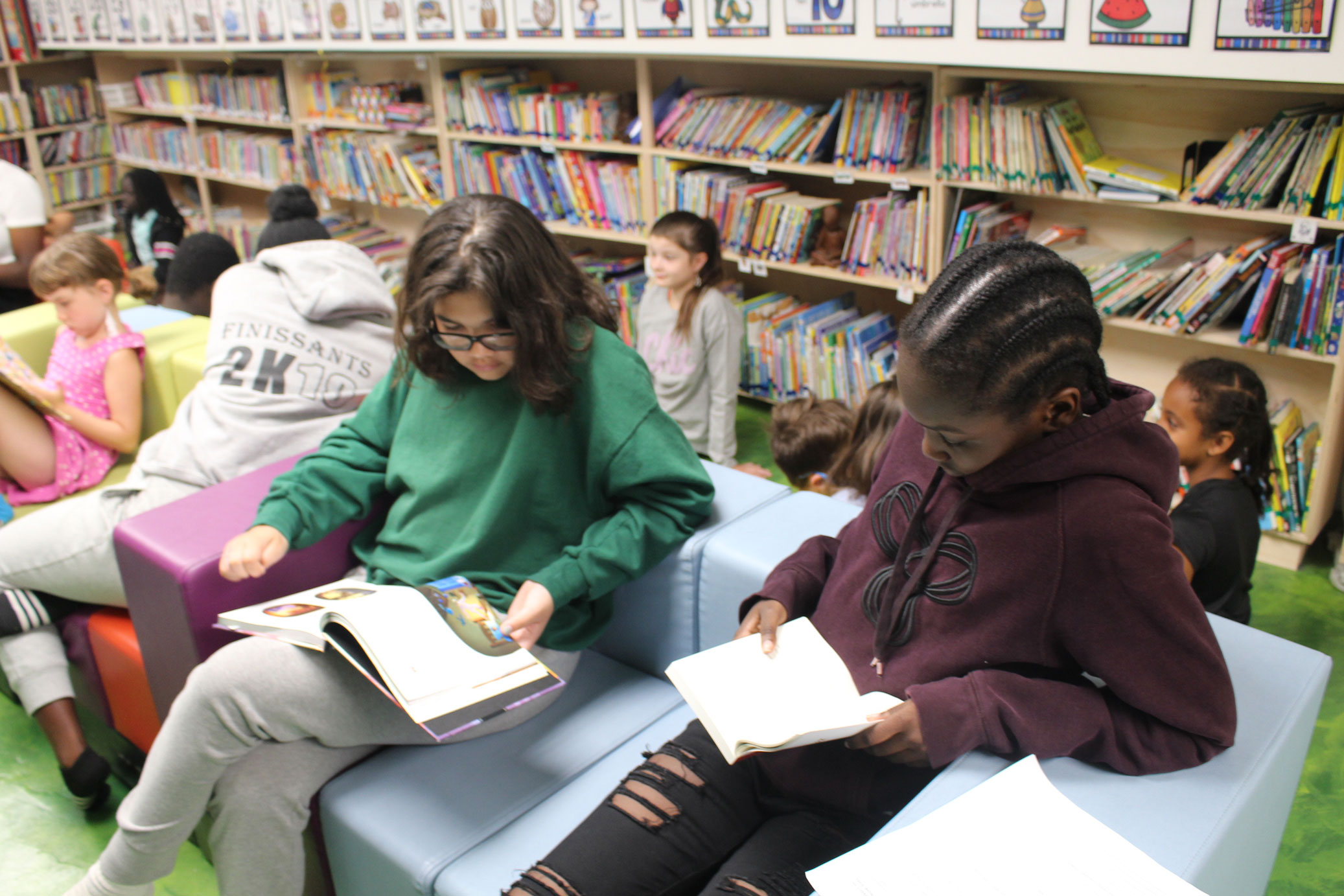 For the past three decades, the West Broadway Youth Centre in Winnipeg has offered free full-day summer camp and after-school programs. Nearly 800 kids, preschoolers to high schoolers, attend every year.

Ken Opaleke, the centre’s executive director, says the rules are simple: “treat others the way you want to be treated, use appropriate language and keep your hands to yourself.”

“I want every kid to understand their potential is limitless,” he says. “I want them to know that if they give a straight-A effort, they can get anything they want.”

“One of those kids is now a pediatrician and he sits on my board of directors now. He’s my boss!” says Opaleke. “Having that happen…there is just no better feeling in the world for a youth co-ordinator like me.”

A child’s skills and effort matter, “but literacy is gold,” says Opaleke. The centre has an extensive library, including comic books “because any reading is good reading.” Still, many kids hadn’t read a book in years so he and his team introduced Movie Book Club.

The kids choose a novel that a film playing in theatres is based on, read it and write a short report. If they can have a conversation about the concepts, Opaleke and the team will take them out to dinner and a movie. The program launched in September and so far 100 children have taken part.

The program costs about $35 per kid, and a $10,000 Canada Post Community Foundation for Children grant helps to cover expenses.

“Once we show them it’s possible, these kids will be our next mayors and leaders. They’ll start businesses and pay taxes and support social programs we all need,” Opaleke says. “Whatever we put into these kids will absolutely come back to us tenfold.”

Northern community expands its only library 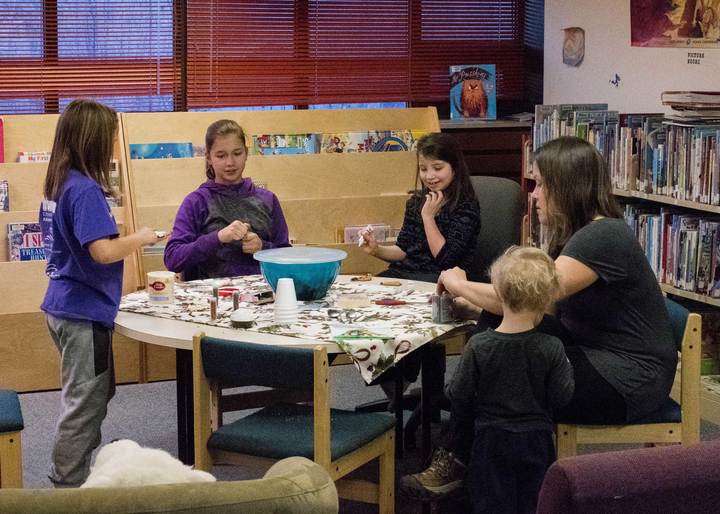 Drive about five hours northwest of Whitehorse and you’ll find the village of Mayo, Yukon, home to about 200 people.

Kim Brooker works for the government in Mayo, looking after marriage licenses, death certificates and health cards. She’s also a member of the library board of directors.

“Actually,” she adds, laughing, “I’m the only person on the library board of directors.”

The village’s public library occupies 1,200 square feet on the second floor of the Administration Building, the hub of local services; the court and post office are also there.

As board member, Brooker quickly saw a problem with the library: it was only open from noon to 5:00 p.m. on weekdays. Most Mayo residents work during those hours, so they aren’t able to use the library. “When I was raising my children, we went to the library all the time,” says Brooker, who used to live in Ontario.

Brooker had a vision: open on Saturdays and expand the programing to include story and craft time for young children and a writing group for older kids. But that would require funding the library didn’t have. Her postmaster handed her the flyer about the Canada Post Foundation Grant six days before the closing date. Her application earned the library a grant of $3,582.00.

It was -27 degrees Celsius the first Saturday the library opened. Still, eight children and five parents came to hear stories and make crafts. The next Saturday, nearly twice as many came.

“Our two volunteers are doing an amazing job creating a program,” says Brooker, who is training to become a fill-in librarian. You can hear the smile in her voice when she says, “there are also five of us on the library’s board of directors now.” 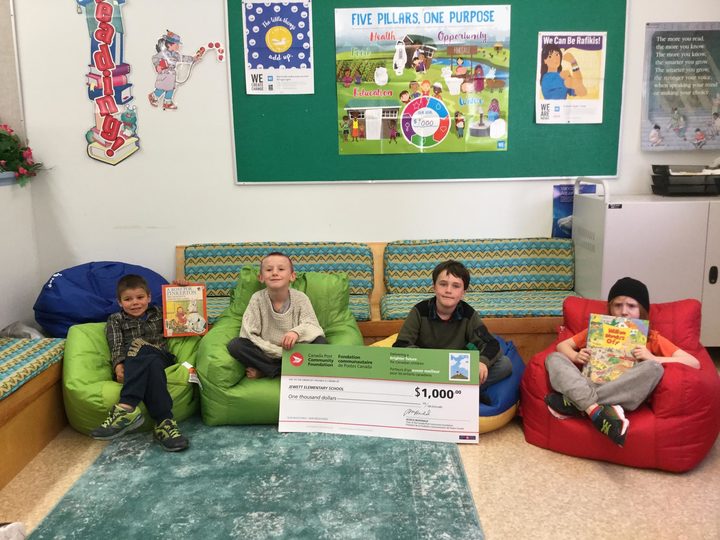 Jewett Elementary in Meadow Creek, B.C., serves kids from kindergarten to Grade 5 and it is tiny – no more than 15 students attend the one-room school house in a year. But the catchment area for the 100-year-old institution is vast: all the kids are bussed in and many come from up to an hour away.

The town is remote and bad weather often shuts the school down. “I’ve spent a night in the classroom a few times when an avalanche blocked me in,” says Molly Leathwood, head teacher for the past decade. There are, however, more difficult challenges.

“Because we’re isolated and small, some people think this isn’t a good school,” says Leathwood, a teacher for 32 years. “That’s why I work so much on community connection. I want people to know we’re committed to the kids and we have something to offer.”

She decided to turn the library into a hub that serves young learners from the school and older students from the community, many of whom are homeschooled. To pull that off, the library needed new furniture and an expanded book collection. The New York Times best-selling series I Survived… is a recent addition. “It’s all these true stories of real-life disasters and the kids just love them,” says Leathwood.

She found the Canada Post Foundation Grant application online. “I just never thought that was part of Canada Post’s mandate,” she says. “That was a nice surprise.” Her application earned the school a $1,000 grant.

“Part of the vision was to build up our digital library and buy a couple iPads as well,” says Leathwood, but “the main focus is still for them to love reading and to love picking up a book. And for everyone to feel at home, here at the library.”

The need for improved literacy is just one challenge facing children. These three people are doing their part to solve the problem and Canada Post is honoured to support them in that quest.