Think “Canada” and many images come to mind. The maple leaf and Mounties. Polar bears and ice flows. Music, multiculturalism and moose. Even if the list were longer, what wouldn’t appear on it? Sharks. Here’s a surprise though: They should make the cut.

The waters off our coasts are full of these feared and fascinating animals. “Out east we have 20 species of shark,” says Warren Joyce, an Aquatic Fisheries Technician with the Department of Fisheries and Oceans in Dartmouth, Nova Scotia.

His department works to ensure fisheries are sustainable and that shark populations remain healthy. It’s a dream job for Joyce, who has been studying sharks for 23 years. “I fell in love with these animals when I was five years old,” he says. “They’re very curious and inquisitive, and they’ve been around longer than dinosaurs.”

There’s still a lot to learn about sharks, especially the “large pelagics” who roam the open ocean far from shore. Joyce works with commercial fishermen to get that knowledge. “They often catch sharks as by-catch,” he says. “We go out on the boats with the fishermen and if the sharks are dead on the gear, we take them and study them. If the animals are alive, we tag them so we can find out about their migration patterns and habitat use.”

It’s a job that takes steady nerves. When the live sharks are hauled onto boats or brought along side in the water, they typically thrash around in a panic. “When applying tags, especially to smaller sharks, I’ve learned that patting them like a dog sometimes helps to calm them down,” says Joyce.

Canada’s west and east coasts are migratory routes for many species of shark looking to eat and mate. Others thrive in the frigid temperatures of the Arctic Ocean. Nearly 30 shark species are native to Canadian waters or known to visit our shores. Canada Post’s latest stamp series highlights five of them: 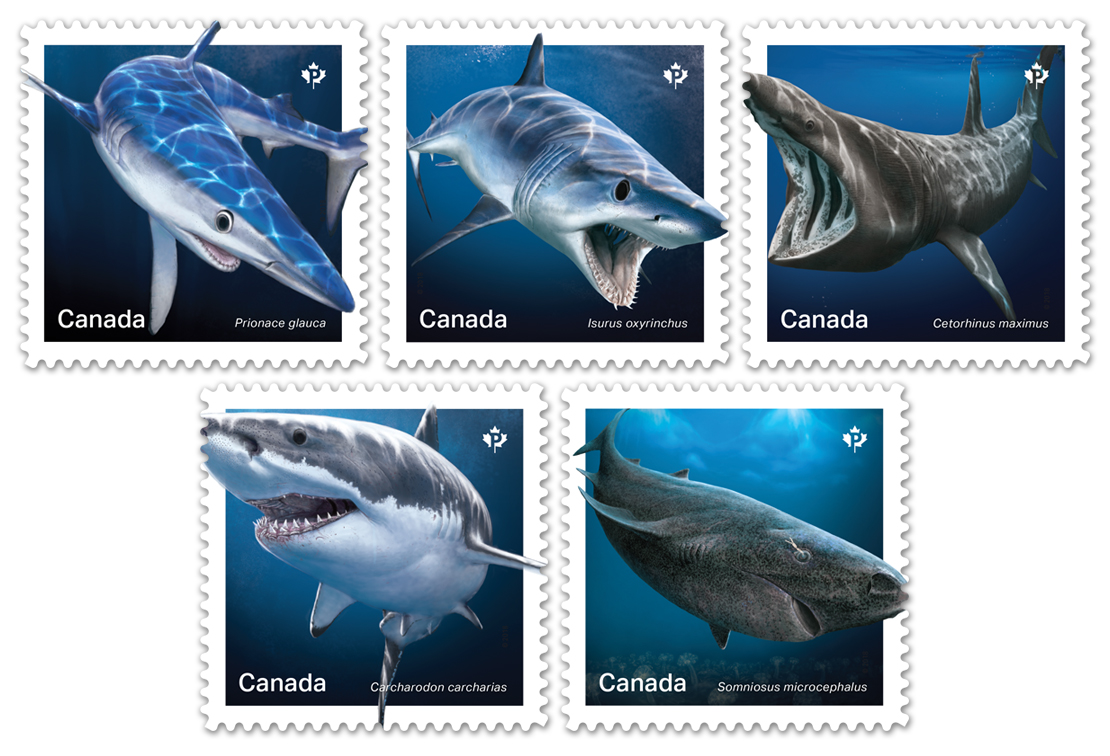 The blue shark. Often spotted around Newfoundland, the Bay of Fundy and the Gulf of St. Lawrence, this distinctive fish is a world traveller: It also prowls the coasts of British Columbia, Argentina and the Indian Ocean. With an indigo back, sapphire-blue flanks and a white belly, the slender blue shark is one of the most common large sharks seen in Canadian waters. It’s often the victim of by-catch – accidental capture in commercial fishing gear. It’s considered especially inquisitive, which has earned it the nicknames “blue dog” and “puppy of the sea.”

The shortfin mako is a temperate, oceanic species preferring warmer waters. While it’s found from Argentina up to the Gulf of Mexico, it will trek as far north as Nova Scotia. It can conserve body heat and maintain an internal temperature up to 10 degrees warmer than the water it’s in. The fastest shark in the world, this sleek fish can reach up to 50 km/h, usually when feeding, and can leap as high as six metres into the air. Even with its jaw closed, you can see its curved and crowded teeth – an especially fearsome expression.

The basking shark glides through the ocean open-mouthed, pulling krill, plankton and fish eggs through its gills. It must filter two thousand tons of water every hour to gather all the food it needs. This gentle giant can grow up to nearly eight metres and is found in the north and south Atlantic and Pacific oceans. During the summer, it stays close to the surface, often along the coasts of Nova Scotia and New Brunswick. In the cold months, they tend to migrate south to warmer waters, likely in search of food.

The white shark, immortalized in the film Jaws, is the largest predatory fish on the planet. It’s considered an endangered species by the Committee on the Status of Endangered Wildlife in Canada and protected under the Species At Risk Act. In the Northwest Atlantic Ocean, it is estimated that white shark numbers had decreased significantly throughout the 1970s and 80s, but ongoing current research suggests that the population is increasing again slowly. Though most common off Australia, South Africa, New Zealand and in the Mediterranean, the white shark gets around. It has also appeared near Haida Gwaii in the fall and Canada’s east coast in the summer, likely feeding on seals and other marine mammals.

The Greenland shark is the only shark that can tolerate the extreme conditions of the Arctic and North Atlantic oceans, where it lives year round. High concentrations of the organic compound trimethylamine help the sluggish animal survive in frigid temperatures – and make its flesh toxic to eat. The second largest carnivorous shark (the white shark is larger), it lives off fish, including smaller sharks, but is happy to scavenge for dead animals too. Among the longest living vertebrates, Greenland sharks can survive for 400 years.