United Way masters the art of being #UNIGNORABLE in the competitive non-profit sector. The integrated campaign artfully unifies local issues with an attention-getting colour to increase donations and local love.

How to be heard in a sea of shouting voices

It’s impossible to solve community problems until you have people’s attention. It’s equally difficult to secure donations when people aren’t clear about what United Way stands for in a sea of worthy causes. There are so many charities vying for share of wallet.

Ipsos reports that the number of people giving to charities increased in 2017, but people are giving less. And, when asked to evaluate effectiveness, Canadians placed more emphasis on a charity’s ability to achieve its mission and create impact.

United Way needed to emphasize what it does, and why it matters in a way that would not only raise the profile of its causes but also make this non-profit stand out.

Standing out with an #UNIGNORABLE colour 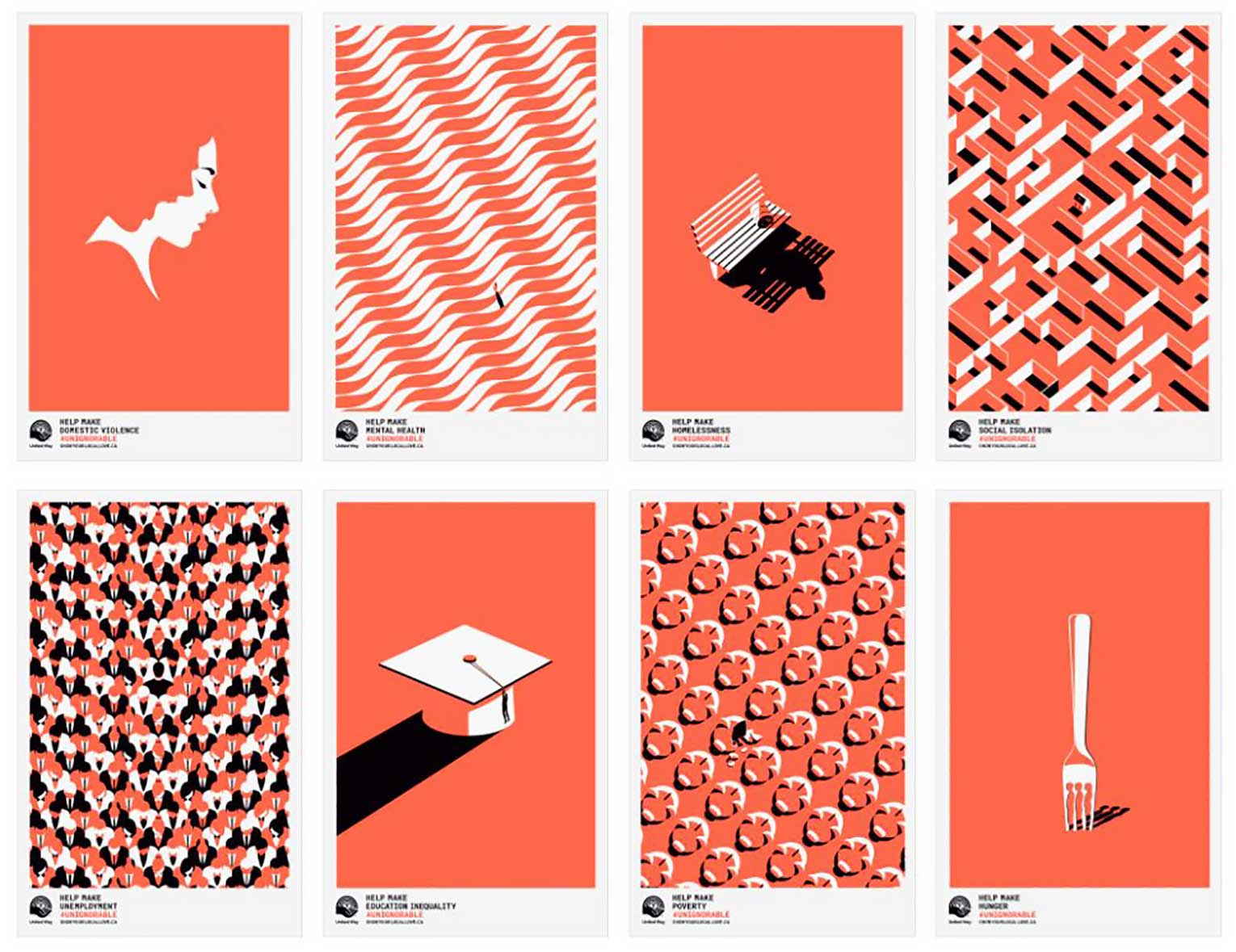 Local issues can be easy to ignore. The strategy was to make them “unignorable” and the campaign objective was to increase visibility.

Charities are good at putting a face to an issue, but what about a colour? The Pantone Color Institute® was selected to create one unifying colour for the eight concerns. Applying the science of colour resulted in a vivid, neon, coral orange, created specifically for United Way.

The #UNIGNORABLE platform was launched with United Way’s largest integrated campaign to date. Building on the colour, the multimedia campaign draws on a tradition of art as activism, using custom art by Malika Favre to represent the eight issues. #UNIGNORABLE came to life through film, video, social, out-of-home, experiential events, merchandising partnerships and direct mail.

Toronto kicked off its campaign with an interactive installation at Nuit Blanche. In film and video, the #UNIGNORABLE colour draws attention to issues: a van that’s home to someone, the food tray of a hungry child, a bullying text, a chair that bars the door to domestic violence. Each ended with the words “local issues can be easy to ignore, we’re making them #UNIGNORABLE.”

The direct mail campaign reached 200,000 addresses. Each mailing concentrated on a different campaign issue, with stories chosen to align with video assets. In future, United Way hopes to further personalize direct mail to match the problems in each neighbourhood they target.

For one of the mailers, a bold rectangle of the Pantone covered most of the envelope – highlighting #UNIGNORABLE. The power of the message inside hit close to home. “An estimated 35,000 Canadians are homeless on any given night. That’s an issue we can’t ignore.” Another mailing brought to life the story of Mike, whose world was changed by United Way after he’d spent years living on the street. Prospective donors were encouraged to “Show Your Local Love” and to give by mail, phone or online at uwgta.org/donate. The mailing also drove to online video content showing how United Way funds change lives.

An investment in a unifying and distinctive brand, and a focus on amplifying visibility proved to be a winning formula that delivered stronger year-over-year campaign effectiveness and overall return on investment.

For the first time ever, United Way got a thank you message from a donor who received one of their direct mail pieces in the GTA: “Just had to write and say that I received my #UNIGNORABLE donation package and was impressed with its simple and personal message. It certainly compelled me to donate to the United Way! I love it!”

Unignorable results, for sure. Louise Bellingham, VP Communications and Brand Strategy adds, “While the campaign only launched in the fourth quarter of 2018, it resulted in unprecedented campaign recall and positive impressions for the brand in our 2018 Brand Health research. It also showed a very high potential lift for stronger brand affinity and future donation intent for those exposed to the campaign. We are thrilled with the initial results and continue to expand and extend the creative platform to more markets across the country.”

The platform is now extending to all markets, and for the first time ever to francophone Canada as #JamaisIndifférents. An exciting new augmented reality experience highlighting poverty is the centrepiece for the October 2019 launch in the GTA.

Get other marketing success stories and more, for free, in INCITE magazine.

Marketing tips for your small business during the 2022 holiday season