4 minute read
By Canada Post
Abandoning “sadvertising”, SickKids created a new brand platform that threw down the gauntlet and challenged people to join a fight that has changed the face of fundraising from fearful to fierce.

Philanthropy is a critical source of funding for SickKids Foundation, which had sought donations through typical charitable campaigns focused on vulnerability and need. Money came mostly from women over 35. To finance a new hospital and secure its future, SickKids needed more. In 2016, partnering with Cossette, they took back the fight, creating a fresh platform that behaves like a performance brand to incite donors to join them in the battle. This new platform created a modern narrative based on human potential that more people could relate to.

Ted Garrard, CEO, SickKids Foundation explains, “People who have had a direct experience with the hospital have seen the great work that goes on inside SickKids, and they have also seen the unacceptable limitations of our physical space itself… A new, reimagined hospital will provide the infrastructure we need to advance our mission of transforming child health in Canada.”

SickKids had to find new ways to appeal to the generosity of more donors: younger parents, millennials, men. Year after year, the foundation also needed to create a sense of fundraising urgency, to maintain momentum until the last dollar was raised. 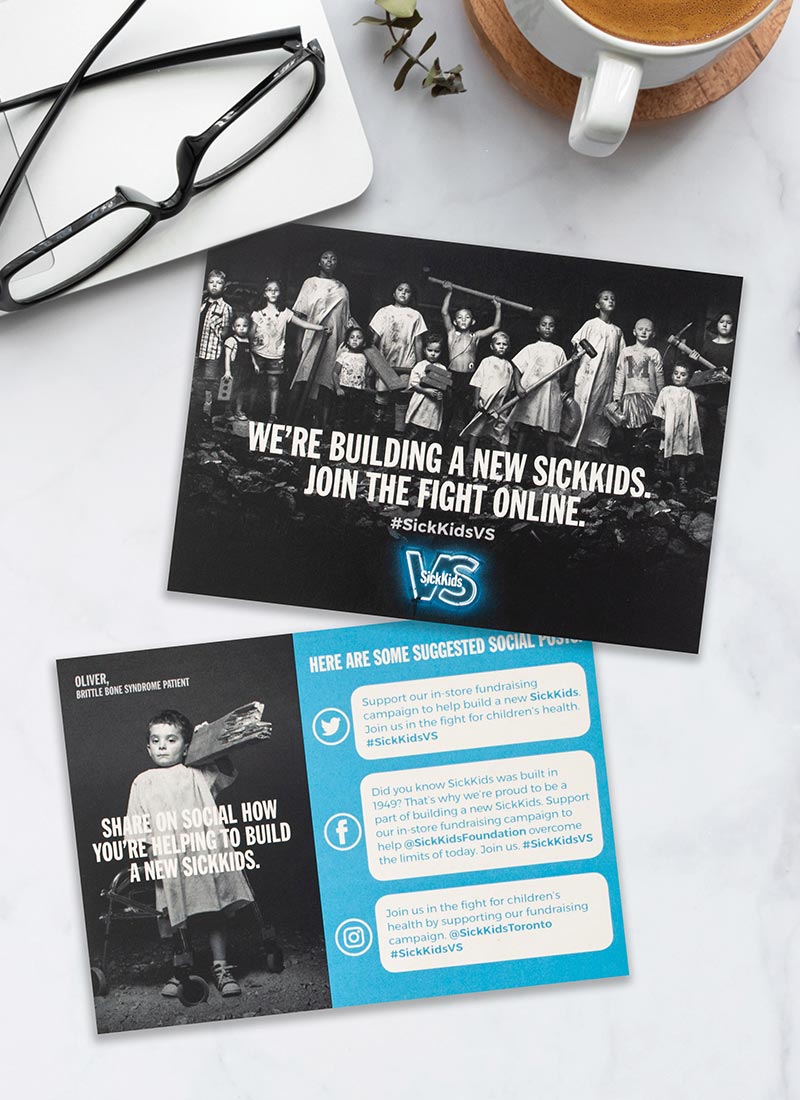 A SickKids VS campaign postcard challenges donors to join their fight online and suggests social media posts they can share.

By reframing everything – from campaign to platform, from victims to fighters, from asking to inciting – the hospital foundation clearly communicated that sick is not weak.

The VS campaign has been recognized around the world as a bold shift in tone for a children’s hospital. With SickKids VS, we celebrate the resilient spirit of our patients, families and staff, and showcase the good 'fight' that goes on at the hospital each day.

In its fourth year, SickKids VS has proven what an idea can do when it is operationalized across an organization effectively. The move away from traditional charitable tactics and “sadvertising” has expanded relevance and appeal with a distinctive brand and focused strategy. The brand platform changed internal perceptions, shifted culture and provided the impetus to restructure internally to better enable performance.

Instead of asking for help, SickKids VS challenged people to join their fight. How could you not? Patients were transformed from victims to fierce crusaders and superheroes as the VS platform shifted perceptions and evolved from campaign to campaign.

The platform launched with SickKids VS: Undeniable campaign. A two-minute video set the tone for the campaign and then they took it to the streets. Giant billboards and larger-than-life murals called citizens to action: “We’re building a new SickKids and we need 5,000 monthly donors. Join us.” Donors could rep their neighbourhoods by planting flags on an online map. Social media and email geo-targeted specific locations. 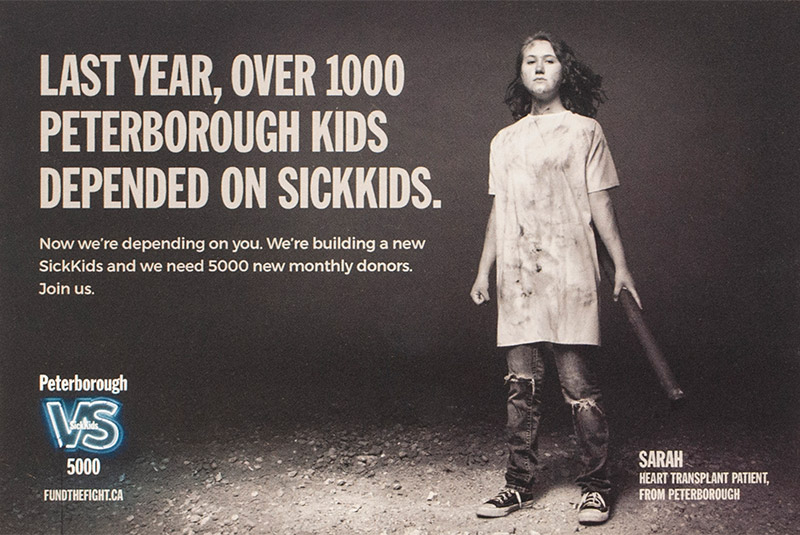 Using multiple channels to communicate a consistent message, the brand created online video and TV coverage, in-hospital signage and OOH billboards. Awareness was reinforced by direct mail, social media, email and print media. The look of the website changed and donors could identify why they’d joined the fight (SickKids VS: Cancer, SickKids VS: Missing Home…).

2019 marked the fourth chapter of the VS platform’s story arc. SickKids VS: This Is Why campaign exposed the realities patients and staff face every day. The SickKids Foundation website explained this fourth chapter as taking people behind the scenes and, “Bringing people who haven’t spent time in the hospital as close to the cause as possible. You might never see it. But this is why we fight.” 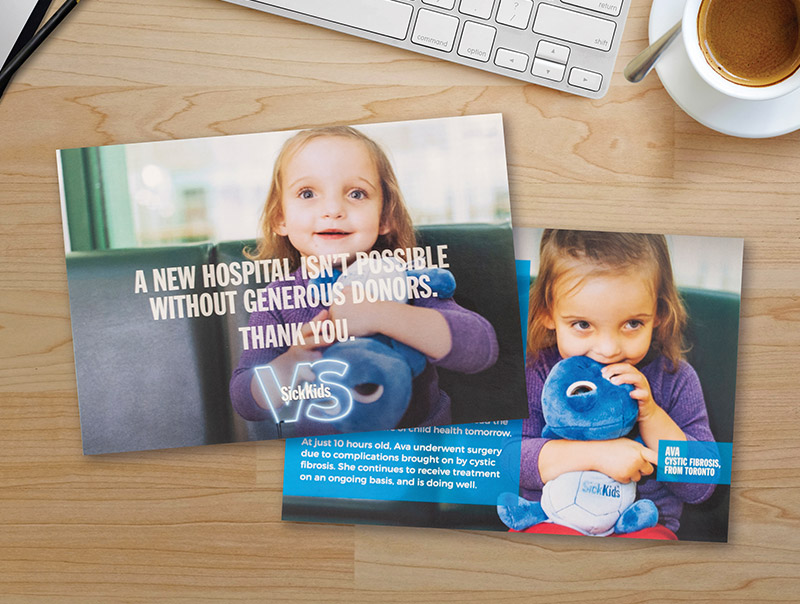 A SickKids VS campaign postcard shows a cystic fibrosis patient’s story and thanks donors for their generous gifts.

SickKids has thrown out the old rule book of integrated campaigns. It is using a sophisticated, data-enabled approach to cross-channel integration that co-ordinates all efforts within an ecosystem architecture.

All the channels are working together to deliver a clear, integrated message. Channels that create emotional appeal are connected responsively to a call to action in direct channels. Patients’ personal stories are matched to regions and neighbourhoods to enhance the personal relevance of communications.

Their performance mindset means they are constantly optimizing and testing channel mix and targeting parameters using data. For instance, mobile data is being used to target people right after they have seen an OOH billboard conveying an emotional appeal with a quick follow-up call to action in social media. Direct mail is being further segmented and personalized to create more relevant and timely appeals within the existing and growing donor base.

A strong brand, aligned objectives, a fully operationalized platform, an emotionally resonant story arc, cross-channel optimization and personalization are making SickKids a master class in marketing effectiveness and what it means to be data-driven.

Every year since, SickKids VS has continued to set new records. The foundation generated an unprecedented $159 million for the 2019 fiscal year. Each year, during their largest campaign period (October to December), SickKids exceeded a goal of 5,000 new monthly donors.

Heather Clark, Vice President, Direct and Digital Marketing, attributes this to a performance mindset that’s focused on closing the gap between emotional capture and donation conversion, optimizing across the customer journey using data to connect exposure to action. Heather Clark says, “We have been able to achieve our goals by staying focused year over year on a simple principle – keep the proven and test the unknown.”

Get other marketing success stories and more, for free, in INCITE magazine.