6 minute read
By Canada Post
This article appears in the Fall 2020 issue of Delivering The Online World magazine. Explore the full issue for even more insights from Harry Rosen and other scintillating stories of success and resilience.

When he joined the executive ranks of Harry Rosen, the company his grandfather founded, Ian Rosen had designs on digital dominance. His plan is working.

Ian Rosen is reminiscing about being a stock boy, and it sounds like he’s smiling. Rosen is talking on the phone about being a teenager and organizing display tables at Harry Rosen, his family’s iconic menswear store, on Boxing Day. “That was before online shopping,” he says. “Boxing Day was the real heyday of retail.” Chaotic, too. Men and women grabbed overcoats from racks, inspected stitching and fabric, and dropped what didn’t interest them to the ground. They shook out carefully folded shirts, held them up for a closer look, then put them down unfurled and moved to the next one. “My dad and grandfather [Chairman and CEO Larry Rosen and founder Harry Rosen] were always on the floor talking to customers,” remembers the youngest Rosen. Today, Ian is Vice President of Digital and Strategy at Harry Rosen. Back then, he “raced to fold shirts as fast as people undid them.” He chuckles a bit at that.

Still, even when experiences are good, third generations often aren’t interested in a career in the family business. “I rejected it,” says Rosen.

After his refolding days, Rosen attended Ivey Business School and the Kellogg School of Management, including study stints in China. “I felt like I saw the future,” he says. It was the early 2010s and e-commerce was already entrenched there. “What is the chance that Canada doesn’t get to a world like this?” he wondered then.

I love fashion, but I definitely didn’t want to be in management consulting my whole life. So I thought I should find a fashion company that’s looking to accelerate its position in e-commerce.

Vice President of Digital and Strategy

After earning an MBA, Rosen spent two years as a management consultant in Chicago. Projects in the mining industry lead to an epiphany. “I don’t like mining. It’s kind of boring,” he says. “I get it, but I don’t love it.” Then he was assigned his first consumer products case which required more creativity. “And I thought: I only want to do work that gets me excited.” Fashion retail, in particular, was a good fit. “I love fashion, but I definitely didn’t want to be in management consulting my whole life. So I thought I should find a fashion company that’s looking to accelerate its position in e-commerce.” Finally, Rosen laughs out loud. Who could that forward-thinking clothing retailer be?

Harry Rosen’s journey from brick and mortar to e-commerce

Harry Rosen started in 1954 as a small, made-to-measure menswear shop in Toronto. Over the next 30 years, seven locations opened in Toronto, then Vancouver, Ottawa, Montréal, Calgary and Winnipeg. The family-owned business became known for its exclusive collections, high-quality fabrics and personalized service. Today, there are 17 retail locations across the country with over 1,000 employees. 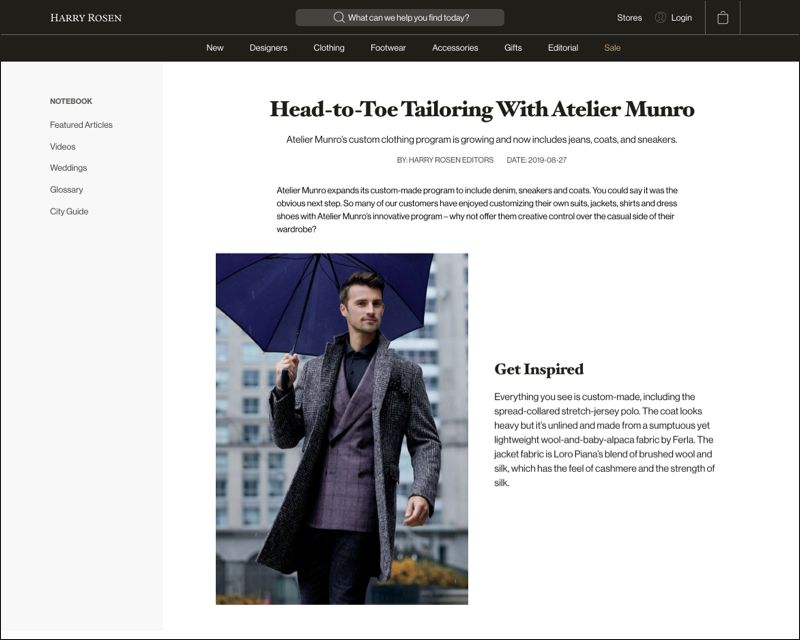 The company launched its first website in 2009, “against the advice of many who told my father, ‘this is just a fad,’” says Rosen. Larry Rosen pushed ahead, “and we’ve used the last decade to learn how to run a business online,” says Ian – who re-entered the family fold in 2018. “That gave us a mandate to change our investment strategy from building stores to building digital,” he says. It wasn’t a hard sell. His father and grandfather weren’t afraid of change. “We’re not 66 years old by accident,” says Ian. “By virtue of being a legacy organization, we’re good at adapting. Now we’re on a journey to digitize our business.”

Read the latest issue of Delivering the Online World for more stories of success and resilience.

It might have been Silicon Valley’s low-key aesthetic and focus on comfort that altered what it means to dress for success. Maybe it was the evolution of dress-down Fridays to everyday business casual that allowed employees everywhere to forgo ties and suit vests. Whatever it was, “the casualization of work is transforming our business and our customer,” says Rosen. Adapting to that shift required aggressively training employees on what dressing for work looks like today. “There had been a boundary, things we held too sacred,” says Rosen. Example? “You actually can wear a t-shirt under a blazer now, but it has to be the right t-shirt.”

For decades, Harry Rosen has been an authority in the tailored world, “but we’re cementing ourselves as the go-to for men’s fashion advice now – not just for suits and ties,” says Rosen. “Our best customers are looking for weekend outfits, sports jackets, knits,” he adds. “It’s a lot more fun, but also a lot more challenging.”

The challenge isn’t just that customers are changing what they want, they’re changing how they want it.

Growing their business digitally to meet and exceed customer expectations

Soon after arriving, Rosen supported the addition of a new Chief Marketing Officer to bolster the company’s push into e-commerce. He also hired software developers, business analysts, performance marketing specialists and loyalty experts, “people who know the digital world and can help us establish a dominant position in it,” he says.

Our advisors are bullish on our shift to online. They see it as an opportunity to extend the relationships they have with their clients.

The key to success was buy-in from the company’s 450 sales advisors. To eliminate competition between online and offline selling, Harry Rosen never differentiated when a clothing advisor drove a sale online or offline. “Our advisors are bullish on our shift to online. They see it as an opportunity to extend the relationships they have with their clients,” says Rosen.

A focus on digital meant changes to operations as well. “We’re hearing loud and clear that if a customer gets two boxes when they wanted one, and that wasn’t communicated to them, they’re upset,” says Rosen. It’s the same for delivery promises. When customers are kept out of the loop about shipping delays, they get annoyed. “It’s no longer good enough for us to just sell nice stuff,” he adds.

To help meet those changing customer expectations, the company hired a new Director of Logistics with experience at Walmart and Sport Chek – two large retailers used to moving huge quantities of inventory. “You need the right systems to make sure you’re picking orders effectively,” says Rosen. “We’ve never had to be an efficient operator, but we know our clients are benchmarking us against the likes of Amazon.” 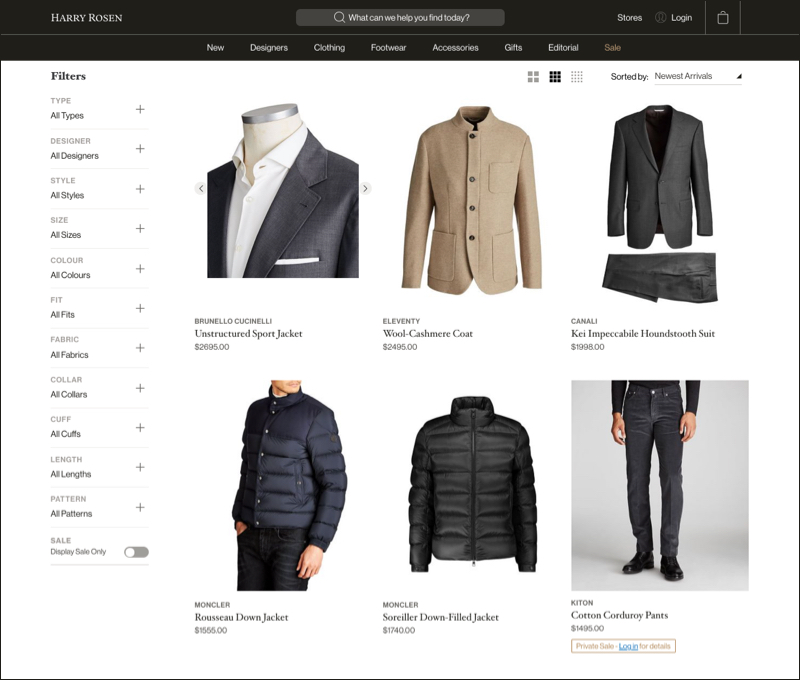 Rising to the challenges of COVID-19

Before the pandemic forced retail operations across the country to close, online sales represented seven to eight per cent of Harry Rosen’s revenue. During the period that followed, “Black Friday-style traffic” as Rosen calls it, drove that number to 40 per cent in the first half of 2020.

By March 2020, the company had plans in the works to rebuild its e-commerce website by the end of the year. But with the spike in demand due to the COVID-19 situation, there was no time to wait. “You’d be crazy to budget six months to finish a complete re-platform effort that included all backend systems, such as the order management system,” says Rosen. Crazy times call for crazy measures: the new website experience is now up and running. It will be vital to meeting Rosen’s 2020 e-commerce sales target – ending the year up 350 per cent. “It [e-commerce] will nearly be our biggest store,” he says.

When he opened his first store in what was then an unfashionable part of Toronto, customers made appointments, giving Harry Rosen and his co-founder brother Lou time to lay items on a table before the customer arrived. Harry named it “the laydown.”

There are rules to a good laydown: there must be a focal piece, accessories that accentuate it and options presented in threes. “You’ve got to push the customer’s boundaries a little bit. You don’t just show what they said they want,” adds Ian Rosen.

The goal is to not force our clients to wade through the website themselves. The heavy lifting is done for them.

Every advisor is trained on the laydown. Today, though, the practice has been modernized by Herringbone, the digital selling app (with real-time inventory and customer records), which the younger Rosen introduced in the summer of 2019. Advisors use the app to curate outfits from merchandise on the website, which customers can purchase in just a few clicks. “The goal is to not force our clients to wade through the website themselves. The heavy lifting is done for them,” says Rosen. Advisors can also use Herringbone to build a profile so the next time that customer arrives, the advisor will know sizes and preferences and can make suggestions to match.

“What a laydown says, whether it be one that’s done in person, the way my grandfather did it, or digitally, the way our advisors do it today, is ‘let’s focus on the relationship between you and me.’”

Clothing trends will come and go, popular styles will disappear, but tools and technologies will allow the Harry Rosen brand and the laydown to last. “I couldn’t think of a better legacy than that,” says Rosen with a smile.

Get a steady stream of it from the Delivering The Online World Magazine. Subscribe today to receive future issues!

Free Shipping North: Is your business ready to deliver?