Taming of the beards

They weren’t actively searching for the next big thing to turn into a thriving online business. Instead, couple Rick Heatley and Keri Brunskill got into the comb making business organically.

Heatley, a high-end furniture maker, was building a kitchen for his mother in the summer of 2013. On a whim, he decided to start growing a beard and not shave it off until the kitchen was finished.

“My mom kept making changes and things took longer than originally thought. So I ended up with this big beard,” says Heatley, who’s also known as Big Red because of his bushy, ginger facial hair. “I was never really intending to keep the beard. It just kind of grew on me.” (Pun intended.)

Because he had the right tools on site at his home workshop, Heatley started to make, test and remake different styles of wooden beard combs to tame his tangles. Slowly, he and Brunskill, who live 20 km northwest of Victoria, realized they might have a new business on their hands. They showed their products to local barbershops and got their feedback. The hair care professionals were so impressed that they snapped up the combs on the spot.

Little did the duo know that the beard grooming market was about to explode as young hipster men everywhere decided to turn full-on facial hair into a global fashion statement.

Fast forward to 2015. Big Red Beard Combs now sells combs, beard balms and oils online, employs nine people and has seen sales double in the past year. It ships about 1,000 combs per month to customers around the world, with the U.S., Sweden and France among its most profitable markets.

Brunskill, head of web design and marketing, attributes the company’s success to the high quality of their small combs. They are typically made of walnut, cherry, makore and teak, and are unusually strong for their size.

Big Red combs are laminated to give them extra strength, which is a niche the company has created and takes great pride in. The combs come in a dozen styles, including ones that are artfully engraved, double-sided and foldable. 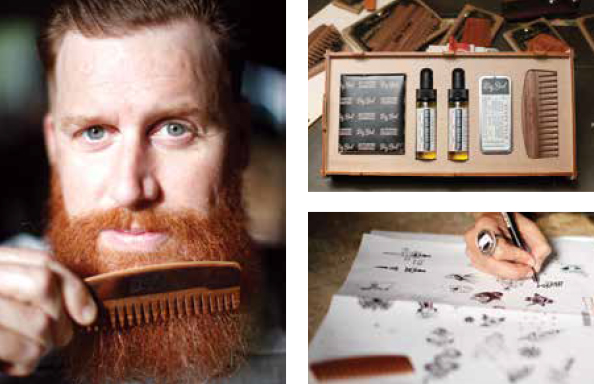 Turning their idea into a business wasn’t easy. For instance, before launching the company, the pair didn’t have much experience with social media, which they consider an integral part of growing their business.

Other hurdles included getting approved to accept credit card payments, creating a responsive website for desktop, tablet or smartphone (50 per cent of their customers access the company via mobile devices), and finding the most cost-effective shipping strategies.

“The shipping method was something we had to learn a lot about,” Heatley says. “We did some research into the cost for shipping certain sizes and weights of packages, so when we were designing the products we kept that in mind.”

Also, in order to enable anyone on staff to easily drop off shipments at the post office at the end of the day, the company opted to use Canada Post’s Electronic Shipping Tools to print labels in its office.

Now, their biggest challenge is competition. As the popularity of beards increases, so is the number of retailers catering to them. Just a few years ago, a Google search for “beard combs” turned up zero hits; the same search today gets more than 700,000. But the pair is also keenly aware that they must position themselves for success after the hipsters move on to a new facial trend.

“There’s a massive oversaturation of product. The hipster component of the beard revival will die off and a lot of those companies will move on to something else,” Heatley says. “But there will be a core set of companies that will continue to cater to the bearded lifestyle, and we’ll be one of them.”

According to Heatley, the couple is also looking to increase sales in the Middle East, where beards are part of the culture for men of all ages, not just a passing fad. “That’s a whole other market there.”

But for now, Big Red Beard Combs is riding high on its popularity among all buyers: hipsters, bikers, lumberjacks, regular Joes and the women who offer combs to these hirsute guys.

“Men who have beards are fiercely proud of their beards,” says Brunskill. “And they all want to take care of them.”

How London Drugs supports its community with their Local Central program