Why you should stop listening to millennial myths

I can’t think of a retailing conference I’ve attended where there hasn’t been a session on how to market to millennials.

Typically, millennials are described as esoteric beings who marketers struggle to understand. Retailers and brands in the audience furiously take notes, anxious to comprehend the generation that will ultimately make or break the future of their business.

Millennials are your next best customers

A 2018 report from Nielsen states that millennials currently represent 27 per cent of the Canadian population. They are spending more dollars per shopping trip than any other generation – and at $55.45 per trip, that’s a $2.11 increase from 2017 and more than $7 above the national average. Yet this is only when they shop in-store. The same report states that, compared with other generations, millennials are making on average 43 fewer trips to stores annually. Retailers and brands clearly understand the reality of the situation: adapt or die trying.

Millennials aren’t all the same

Brands are attempting to frame a generational range of 20 years, a cohort of consumers that understand and engage with technology in vastly different ways. The youngest millennial grew up with a mobile device in hand, the oldest millennial is nearly 40 years old and [likely fondly] remembers the good ol’ analog days.

Unfortunately for marketers, there is no one-size-fits-all approach to millennials.

We constantly hear and read myths about what millennials want and don’t want. Sensational headlines tell the world that our attention spans are getting shorter, that we are killing physical retail and that we are anti-social.

I personally spend about five hours a day on my phone. Like it or not, my world has become a series of notifications and alerts.

I curate what I look at based on my beliefs and who provides me the most value. I unsubscribe from e-mails daily, and I use unfollow and mute buttons liberally. The harsh reality that brands and retailers may want to consider is that very few people I have spoken to are interested in “joining the conversation” with a brand, unless it provides them with something to talk about – or perhaps allows them to feel closer to like-minded people.

Brands and retailers that send promotional emails every other day with a call-to-action or a selfie wall asking me to promote their store aren’t likely to get the response they’re looking for. And, not every millennial wants to “download the app” for the handful of times they shop with you.

Clichés about millennials are wrong

Brands are endlessly trying to devise strategies that appeal to this generation when what they need to be thinking about is how to understand their customers, and market to them as people.

Brands are endlessly trying to devise strategies that appeal to this generation when what they need to be thinking about is how to understand their customers, and market to them as people.

Take Macy’s One Below in Herald Square, New York. Launched in 2015, specifically to attract the attention of millennials, Macy’s created what can only be described as a clichéd attempt to jam pack the space with anything and everything they thought millennials would want. A selfie wall, 3D printers and charging stations all made the space feel out of touch and contrived. The selfie wall encouraged people to use the hashtag #Macyslove – because everyone wants to post a selfie proclaiming their love for a department store, right?

The reason this strategy doesn’t work is because Macy’s may not have taken the time to understand their customers outside of the myths. They didn’t provide them with intrinsic value. Macy’s technology and installations in the space seemed gimmicky, and missed an opportunity to make genuine connections through highly personalized and high-touch experiences.

Consumers, regardless of generation, now crave the same hyper-targeted experiences in physical retail that we receive online. Our behaviour as in-store shoppers is being shaped by our changing expectations and driven by the personalization we are accustomed to online. A study by Salesforce revealed that 51 per cent of consumers expect that companies will anticipate their needs and make relevant suggestions before the consumer even makes contact.

A young woman explores the Sephora Visual Artist app on a tablet in a Sephora store. Source: Perch Interactive.

Your vibe attracts your tribe

In contrast to Macy’s, Nike has developed an acute knowledge of their customers, and found a plethora of ways for them to connect with the brand. The Nike+ Run Club is a gateway for collecting a database of consumer information. The Nike+ app offers access to experiences in new stores, Nike by Melrose in Los Angeles and Nike House of Innovation in New York City. They’ve used technology to understand not just how millennials shop, but who they are and what they like, so that Nike can offer services such as reserve-in-app-and-try-on-in-store.

Nike’s events offer a sense of community, with their stores as the backdrop. They took a stance on political issues when their advertisement in support of Colin Kaepernick taking a knee against police brutality went live. Did they take a hit immediately after? Yes. Did their stock close at record highs in 2018? Also yes – not to mention attracting a new customer base. 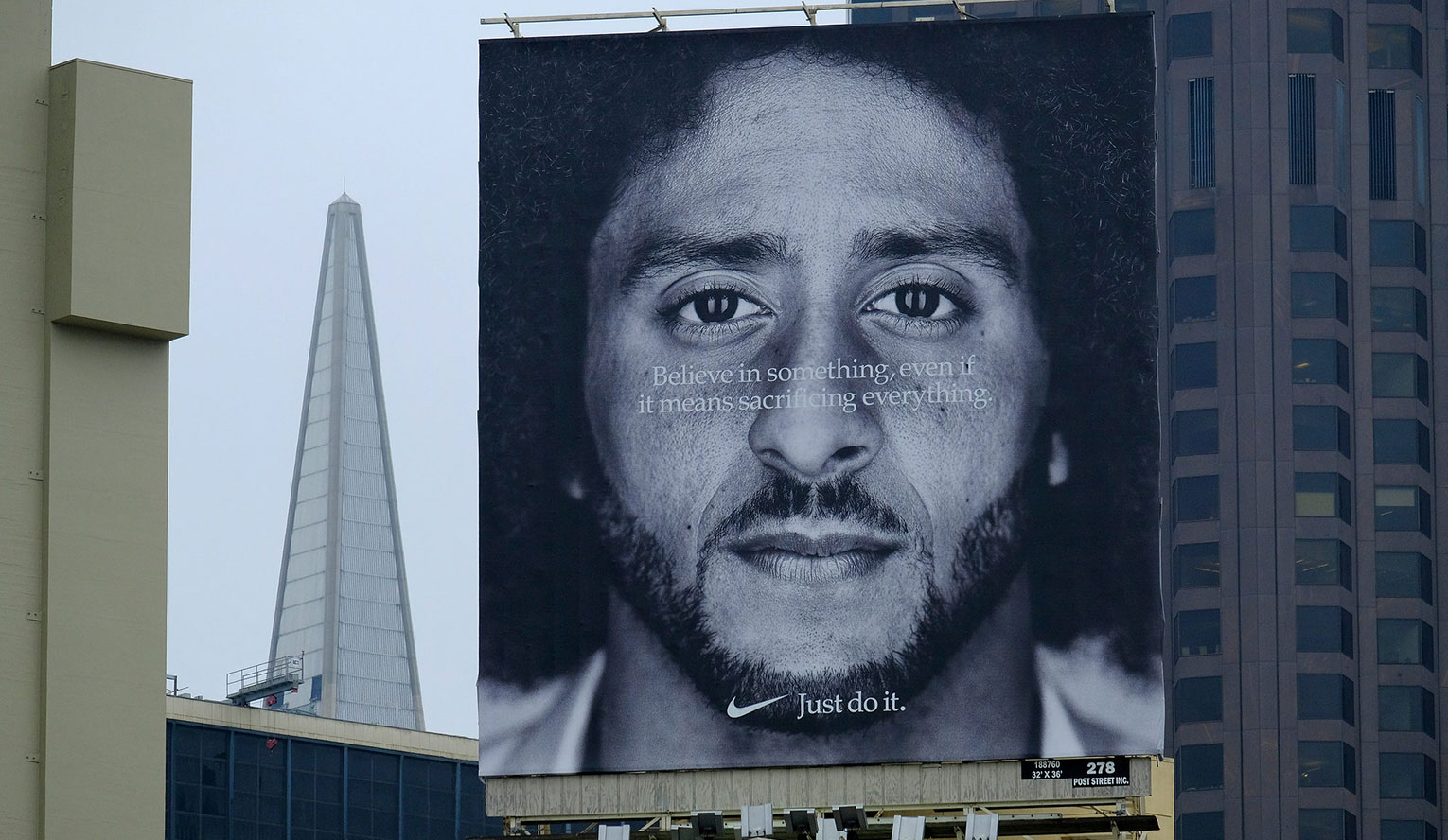 A giant billboard Nike ad featuring the face of kneeling quarterback Colin Kaepernick with the text, “Believe in something, even if it means sacrificing everything. Just do it.” Source: The New York Times.

We live in a time where the world is being shaped perversely by the political landscape. The #metoo movement, the environmental crisis, diversity and inclusion are all issues we watch unfold. We participate and drive them too. These issues are causing us to look critically at how we act, what we say and what we do – including the organizations we choose to support and the retailers and brands we choose to shop. Gen Z is growing up watching this unfold and is willing to pay 50-100 per cent more for sustainable products, compared with other age groups, who are willing to pay only 25 per cent more.

Remember the infamous Kendall Jenner Pepsi ad? In an effort to be politically and culturally relevant, Pepsi featured a 30-second spot with Kendall Jenner marching through a crowd of protesting multicultural millennials. Jenner makes her way through the throng and up to a line of riot police, handing one a Pepsi. Everyone hugs. The protest is over! And, just like that, they minimized important issues that people truly care about to a 30-second tone-deaf, celebrity endorsement of their brand. With no corporate commitment to the cause, the ad was a slap in the face to those who actively fight these issues every day.

Patagonia takes a very different approach. Founded by Yvon Chouinard, whose passion for environmental issues is at the root of everything the company does, Patagonia is actively in the business of environmental and social responsibility. The company promotes women into leadership roles, sends nannies on business trips to encourage work-life integration and hosts child care within its facilities. Patagonia also made waves recently when it became public knowledge that it not only encourages its employees to take part in peaceful protests, but will bail them [and their spouses] out of jail if they are arrested as a result, pay for their legal fees and pay them for their corresponding time away from work.

It is this dedication to embracing their values and empowering their employees to live according to those values that has become an exemplary model for modern business. An advertisement that went to market in 2012 asked consumers to question whether or not they really needed another jacket. The ad read “Do Not Buy This Jacket.” It demonstrated that the future of the environment is more important to Patagonia than the sale. But a funny thing happened after it went live – sales increased dramatically.

Learn about environmental action opportunities in your area through Patagonia Action Works. Click the link in our profile to #AnswerWithAction.

Be a value-based brand

Companies like Nike and Patagonia are succeeding because they recognize that they have the power to give their customers a voice – not as a generation but as people. These brands are representative of the beautiful and diverse world that we live in. We are inundated with notifications, messages, emails, news alerts. We are growing tired of it. We are looking for excuses to turn off our phones. We are seeking human connection.

Retailers should not be discouraged. I would argue that this is the most powerful time for retailers and brands to take a stand for what they believe in, bring people together and show undying love and support for their customers. We do not want retailers and brands to pander to us using generational clichés. We want you to give us a reason to talk about you and engage with you.

Once you begin to understand us, not as a generation, but as people, you can provide true value for us and for generations to come. Ask not how you can make millennials loyal to your brand, but what you can do to be loyal to millennials.

Taggeddirect mail marketingretentionbrand loyaltyINCITE marketing magazinemarketingmass personalization
Reilly Stephens began her career in experiential marketing. Since then, she has worked at agencies such as Sid Lee and Vice Media as an integral part of the ideation and launch of national campaigns for brands and retailers including Coca Cola, General Mills, Ford, Google and lululemon. Reilly has an unrivalled finger on the pulse of all things culture. As Retail Prophet’s Director of Insights, she leverages her understanding and network in the music, tech, marketing and advertising industries to keep the team up to speed on grassroots movements and trends.Read more by Reilly Stephens