The Orchestre symphonique de Québec (OSQ) is a symbol of cultural excellence whose existence has been one of the main driving forces behind musical activity in the Quebec City region. On October 3, 2002, the OSQ celebrates its 100th anniversary, making it the oldest active orchestra in Canada's history. To mark this occasion, Canada Post will issue a single domestic rate ($0.48) commemorative stamp on November 7th, during the 'Concert of the Century,' which will feature Austrian composer Gustav Mahler's Symphony No. 2, The Resurrection.

Musical Excellence
Throughout Quebec City's history, the OSQ has figured prominently, playing at the inauguration of the Théâtre Capitole in 1903, the capital city's tricentennial celebrations in 1908, the inauguration of the Palais Montcalm in 1932, and the inaugural ceremonies of the Grand Théâtre de Québec in 1971. Every year, the OSQ delights more than 100,000 people during its regular and promotional concerts, free regional concerts and special joint productions with the Opéra de Québec and the Grands Ballets Canadiens.

Expert Direction
The OSQ is a professional group of 62 musicians currently under the baton of Yoav Talmi. Its founding conductor, Joseph Vézina, was the first in a long line of outstanding conductors, including Edwin Bélanger, Wilfrid Pelletier, Françoys Bernier, Pierre Dervaux, James DePreist, Simon Streatfeild, and Pascal Verrot. Some of the world's most internationally acclaimed artists have been welcomed by the OSQ, including conductors, singers, pianists, violinists, and cellists of considerable renown.

Ongoing Successes
The OSQ's mission is to interpret the symphony repertoire. It strives to contribute to cultural growth in the community through programs encouraging youth to become familiar with the classics through symphony matinees staged for school groups and performances designed specifically for young families. These efforts earned the OSQ an Opus award in the category of Jeune public (young audience) in 1999 for its Planète Baobab concert. In 2000, the OSQ won two Opus awards for outstanding work in the field of contemporary music.

A Bright Future
The OSQ continues to remain active, playing throughout the summer at various events in and around Quebec City. Concerts are regularly broadcast on Radio-Canada's Chaîne culturelle station, and their music is available on 12 recorded albums, including Noël, which won the Félix award for best classical recording of 1994.

A Sound Design
Designed by Monique Dufour of Méchant-Boris studio d'infographie and Sophie Lafortune of Klaxon Publicité in Quebec City, the OSQ stamp features a photograph of the symphony in 1903 with the conductor and founder, Joseph Vézina. The expressive hands and their warm colouring set the tone for today's orchestra, while the extended baton adds a dynamic touch and expresses the continuity of this historic institution. Dufour and Lafortune have designed numerous stamp issues for Canada Post, including The Circus, the Centennial of the Canadian Institute of Mining, Metallurgy and Petroleum, and Tulips. 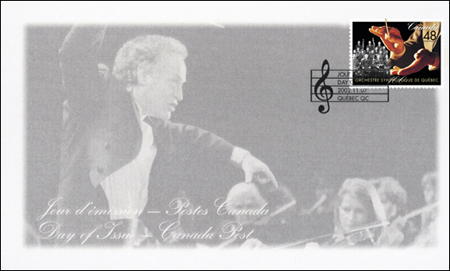